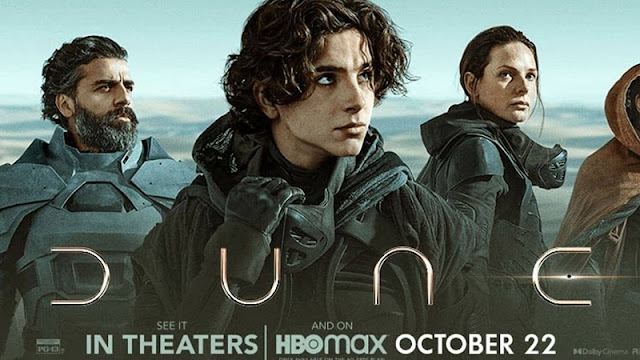 remake : to make a new or different version of (something, such as a movie, song, etc.) : to make (something) into something else. remake. noun.

Granted there were previous versions adapted from the first novel. The '70s attempt by Jodorowsky, 1984's version by David Lynch, and the Sci-Fi Channel mini series from 2000. But in order to be any kind of a "remake", there would have to be significant nods, acknowledgment, or transplants of the previous versions ingrained in the new adaptation, and that is simply not the case here.

Like with Peter Jackson's Lord of the Rings and subsequent Hobbit films, this adaptation of Dune mines the original source material for a wealth of textures, emotions, and story that the previous versions lacked. It has crafted it's world-building from the ground up, and updated everything necessary for modern audience sensibilities.

I read the first Dune novel in the mid-'80s before seeing the Lynch version on opening day. I recall at the time leaving the theater with a profound sense of disappointment. Even though a lot of the designs have become ingrained in the genre, the delivery was below expectations in such a fresh post-Star Wars era. Even the mini-series suffered from production restrictions.

In the Denis Villeneuve version, is seems as if WB let him off the chain and he ran with it. As with some of his previous films Sicario (2015), Arrival (2016), Blade Runner: 2049 (2017), Villeneuve has a clear visual idea of exactly what he wants to see on screen and knows what to do and who to work with to get it. This puts him in a similar category to other auteur directors such as Steven Spielberg, James Cameron, Guillermo del Toro, Ridley Scott, and Peter Jackson.

The cast was on point. Granted this is the first thing I have seen Timothée Chalamet in. He was serious but without brooding or angst typically associated with actors of this rank. I kind of put him on par with Mark Hamill the first time I saw Luke. He has a fresh face and inhabits the character so well you forget the idea of anyone else playing Paul Atreides. Zendaya would probably have stood out a little more if she had more to do in this part. The rest of the cast held their ground and gave convincing performances as if they were authentically a part of the world they were creating.

Costume Design was stellar. The detail and textures rooted the characters in the setting. There were only a few tiny instances where anachronisms from ten thousand years prior crept in. Otherwise the armor, stillsuits, and flowing fabrics, lent an air of familiar yet futuristic style.

Production Design was off the charts. It's as if the production team went shopping for the absolute best concept artists on ArtStation and then just dumped a pile of cash on them, wound them up and turned them loose. There is a distinct style and culture visible to all the various houses and people represented. The settings and vistas are epic and thick with atmosphere. The various ship and vehicle designs are understated and convincing. Not much screen time is given to them and they are not the focus of the film. However, the Ornithopters are completely convincing and lots of care was clearly given to their function and purpose. If this is the direction Blackhawk Helicopters are going, I'm going to need one.

The Visual Effects are without a doubt seamless. While the settings and creatures are clearly fantastical, it is blended with the live action in such a way that, like any good effects, they melt into the scene and never call attention to themselves. It all flows together to create a completely immersive experience.

Hans Zimmer's score is tribal, forceful, and completely suitable to create the right mood for the setting. While similar scores like McCreery's music for Battlestar Galactica and Horner's work on Avatar utilize a variety of exotic instruments and rhythms, this score is in the same category. It is clear that Zimmer put in just as much attention to the sound, texture, and themes, for Dune as Villeneuve brought to the visuals.

Be prepared for the fact this this adaptation only gives us the first half of the first book. I'm not going to cover the politics of why WB refused to allow the production to shoot the whole thing at once (like similar classic epics). Nor will I go into detail about the decision to release it simultaneously to theaters and streaming. That is well documented all over the internet. But I will say that WB should pony up and greenlight part 2 immediately.

Super Dune fans may be disappointed with the inevitable changes that always happen with book adaptations, but hopefully the beautiful package the story is delivered in will more than make up for that. It seems like the most faithful adaptation yet. I loved all of it and look forward to the next one.

I give it five Shai-Huluds and am already in line for tickets.

Posted by Patrick Keith at 5:29 PM

Email ThisBlogThis!Share to TwitterShare to FacebookShare to Pinterest
Labels: Reviews 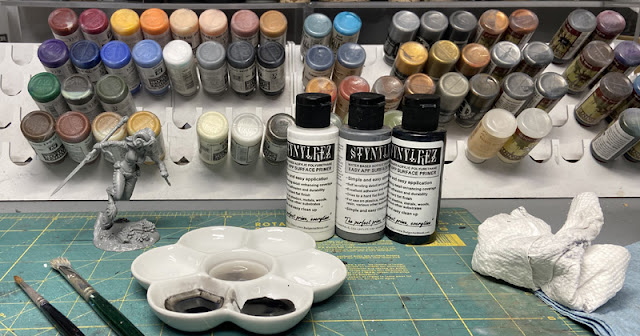 Several folks recently asked me about my paint preferences. Currently my collection is quite small and I mix a lot of my colors on a wet palette. I prefer to use Vallejo Model Color for several reasons but primarily it's for the colors available. Although I admire the effect of Non-Metallic Metals (NMM) I prefer to paint with actual metallic colors when needed. In my opinion Privateer Press P3 are the best metallic paints. I re-bottle my P3 paint into dropper bottles. I also have a small assortment of Army Painter washes I use mainly for basing and scenery pieces. I prefer to mix my own wash medium from a combination of Liquitex matte medium, water, flow improver, and assorted purples, blacks, and browns. I mix all of this into an empty dropper bottle and use it in a porcelain watercolor palette (see image above).

This is my list of Vallejo model color paints:

A Bit of History

I've been building and painting models since around 1974. I started using what was common, Testors and Pactra enamel paints. These were more or less effective depending on your skill and application. In the mid to late 80s when I started painting gaming miniatures I switched to Floquil's Polly-S acrylic paints. I was already using Liquitex artist colors for 2D painting and used them for painting minis as well. I attended Liquitex's artist instructor certification workshop while I was working in the art department at Michael's Arts & Crafts in 1988. I was part of the group that got Liquitex to bottle their artist colors with flip-top caps. For a time after that I taught craft painting, and airbrushed t-shirts & guitars on commission.

After getting into Warhammer in the early 90's I added Games Workshop paint to my collection. It's serviceable and offers a large range of colors. I am not a fan of the bottles.

Once I started painting competitively and selling my minis on eBay in the early 2000's I switched to Reaper Master Series paint. There was a lot that I liked about the MSP series. The color range is huge AND they come in dropper bottles. However, at the time, their entire range of blue was based on Pthalo pigment. It took a little coaxing to get an Ultramarine mix, but it was still just a simulation.

Once I set up the new studio in 2017 I gave away my paint collection and replaced everything with the current list above. I still have 3 or 4 MSP colors but the majority is what you see in the list. I like the color assortment of the Vallejo paint and the fact that it has real artist pigments like Ultramarine, Burnt Umber, and Yellow Ochre.

Generally the models I paint now are either pewter castings or resin castings. But this would also apply to plastic 3D print filament or 3D printer resin. Typically anything that's cast has some sort of mould release agent on it. Pewter usually has talc powder and cast resin has a silicon spray residue. All of these are used to make the parts easier to come out of the mold with as little damage to either as possible. These release agents are counter to any sort of paint application. 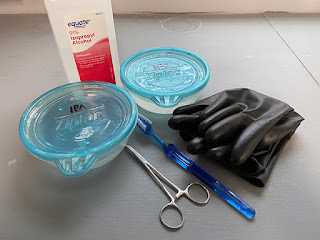 Pewter parts can be rinsed in regular water to remove the talc before applying any surface primer.

For resin parts, I prefer to wash them first in 91% isopropyl alcohol and then rinse with plain water. I have a couple of little Ziploc food containers and an old toothbrush for a bit of scrubbing that does the trick. You have to be really careful not to get alcohol, or IPA, on your skin for prolonged periods as it will dry it out to the point of chemical burns. I use a pair of butyl gloves I got that is resistant to alcohol. Many common gloves like latex or nitrile have micro holes in them that will repel heavy liquid, like water, but alcohol and acetone comes right through them.

A good paint job is only as good as its primer.

I use assorted Krylon and Rustoleum primers for a variety of models. But the BEST primer I've used is Badger's Stynylrez primer for airbrush. It has amazingly smooth surfacing and sticks really well to a variety of materials, even plastic & resin, although it's a water-based acrylic primer. It has a nice matte surface and provides good tooth for subsequent layers of paint.

Any good paint job will need protection. Especially if the model is handled frequently.
The go-to holy grail is Testors Dulcote. Due to shortages and a restructuring of Rust-Oleum's Testors paint brand, it may be a little hard to come by now. I have recently tested both Krylon's Matt Finish and Rust-Oleum's Matt Clear on assorted models. The Krylon spray has the most dull matte finish of the two, the Rust-Oleum is a bit satin-like after drying.
Hopefully this helps gives a little direction and insight into my painting experience. But the best choice will be up to the individual painter to determine what works best for them.