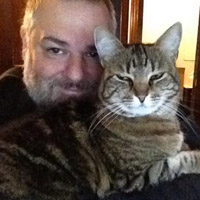 Truly a Renaissance artist at heart, Patrick began his art at an early age sculpting and drawing. Over the course of his life he has studied and crafted art, music, sculpture, photography, cinematography, animation and audio recording engineering in a desire to develop a variety of skills, interests and techniques. While working at various jobs to pay bills he continued to study and grow as an artist on his own. In 1999 he co-created the Ernor comic series with his wife Vicky.

While working on this and other comic projects he developed skills in desktop publishing using Photoshop, Illustrator and QuarkXpress. This grew into producing digital paintings and ultimately led to his first game book cover commission with LivingRoom Games. In 2000 Patrick joined the Association of Sci-fi and Fantasy Artists. Since then he has produced illustrated work for several clients in the gaming industry including cover, interior and collectible gaming card art for products like Earthdawn and Game of Thrones CCG. Upon returning from GenCon 2005, Patrick resumed sculpting and endeavored to work through his animosity towards the dreaded "green putty".

After compiling a mountain of reference on the internet he managed to complete his first recognizable miniature figure Meagan the Buccaneer (not counting the short-lived disaster in sculpting with the gooey material ten years previous). Shortly after, Patrick attended the Reaper Artist Conference the same year and participated in a few workshops which solidified his technique and imparted invaluable instruction and tips. 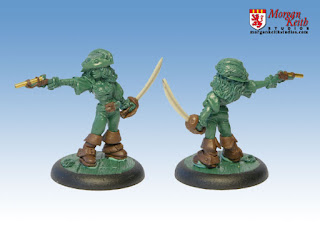 Since then Patrick has taught workshops on sculpting and basing miniatures and has won additional awards for his sculpting. He has provided sculpts for some of the top miniatures companies in the industry and continually works to improve his skill and craftsmanship.

In the fall of 2012 Patrick formed Bombshell Miniatures whose first line of all-female cross-genre models Babes™ was successfully funded through Kickstarter. He now spends his time focusing on work for select clients and this boutique line of Bombshell Miniatures.

Clients:
Patrick is proud to have sculpted for these fine companies:
(these are linked directly to his work where possible)

Patrick is proud to have provided 2D art for these fine companies: