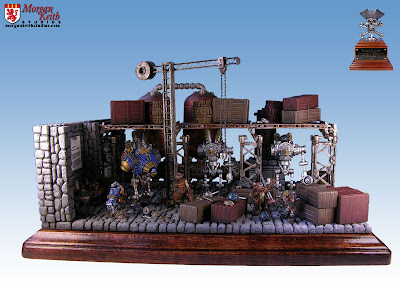 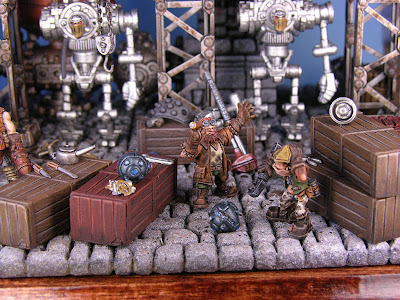 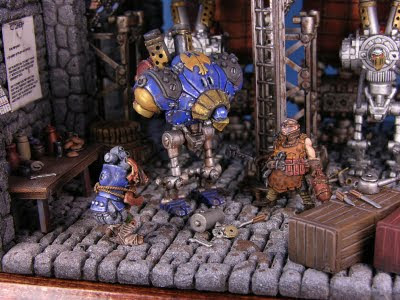 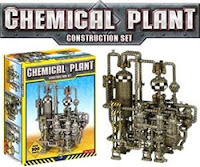 It all begins with an idea.

I had an idea years ago to do a factory-type diorama like the B-26 plant on the the cover of How to Build Dioramas by Sheperd Paine. The edition that I have is the 3rd printing from 1982, that's how long I've been wanting to do this sort of thing. I did a bit of large-scale modeling for the escape movie project, but after coming across the Warmachine game stuff at my local comic shop in the summer of '05 I was really taken with the whole concept and wanted to do a really special project based on the setting to enter in the GenCon '06 Painting Competition. After doing a bit of reading of the background fluff, I had a vision of the the little goblin bodgers standing over a damaged Warjack cortex.

It wasn't until seeing the cool new Platformer plastic game scenery kits in the fall of '05 that the idea of the Warjack Factory itself started to form. IMEX Urban Terrain sets are plastic kits produced in a gunmetal colored, high impact, plastic. No gluing is required, so you can just clip them together and play. You can build them to whatever designs you want and then dismantle and rebuild into new models for the next game. The Chemical Plant box contains over 300 pieces molded in easy to glue, and paint, polystyrene plastic. When I saw the kit, the vision of the factory suddenly clicked. I saw rows upon rows of 'jack chassis in various stages of assembly with the story centering on the little gobber who dropped the cortex. The initial working name was "Abe Normal" referencing Young Frankenstein. 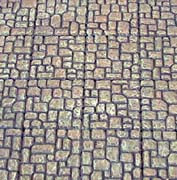 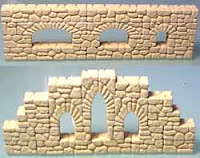 In keeping with the setting design, the interior of the factory needed a solid "fantasy" feel to it to tie the tech bits into the steampunk genre. The Hirst Arts molds seemed to fit the bill. I used the Fieldstone Wall Mold #70 and the Large Flagstone Mold #265 for the walls and floors of the factory.

So over the Christmas holidays of '05 I bought the materials I had in mind to use, the Chemical Plant kit, Hirst molds, resin, silicon, Cygnar mechanics and Warjack miniatures and various Plastruct parts for the crane. 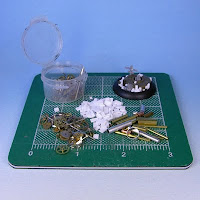 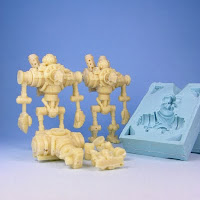 The first thing to do was to build the master patterns of the Warjack chassis. Since the 'jacks were to be in the early stages of construction, I wouldn't be able to use any existing parts from the actual miniatures aside from the furnaces and heads. The arms and legs of the regular gaming models are sculpted with armor coverings and were in action poses. Not quite suitable for the figures I needed for the factory. So, using some old tank kit parts and lots of brass tubing, chopped styrene plastic and green putty, I scratchbuilt the chassis, molded them in silicon and cast multiples in resin. While casting all of these parts, I also cast the pieces for the walls and floor of the factory. This whole process took about a month of spare time. 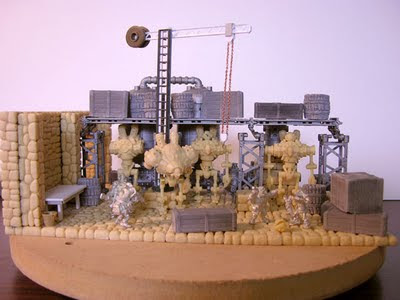 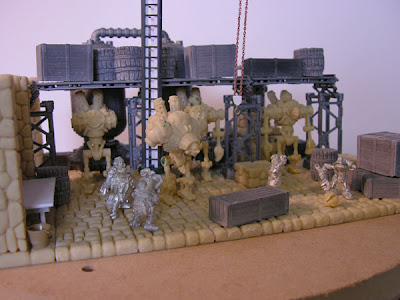 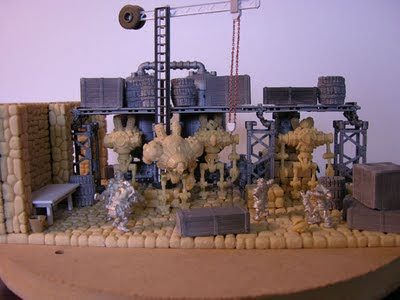 Once the all of the parts were assembled, I arranged them to get an idea if they would fit within the parameters of the basing restrictions of the painting contest. Originally I laid out the floor for an 11" x 14" wooden plaque. I sanded, stained and finished the wood base and then began to lay out the resin castings of the floor tiles from the Hirst molds. Right around that time, Privateer Press announced they would be holding their own painting contest, separate from the regular GenCon Painting Competition. According to their diorama rules, the bases needed to fit within a 12" x 12" area total. This forced me to make some hard decisions at a very critical time in the project. Fortunately, I hadn't assembled the floor tiles. I decided to redesign the layout to fit within the new rules parameters, but had to hunt furiously for a wooden base that would be short of the 12" restrictions.

A quick trip to the local arts and crafts store provided a suitable wooden base, measuring just under the required length. Ideally, the floor sections fit exactly on the bevelled top of the base with no cutting or other alterations. More sanding, staining, and sealing later, I slept much better. 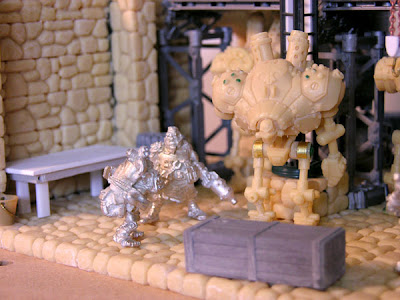 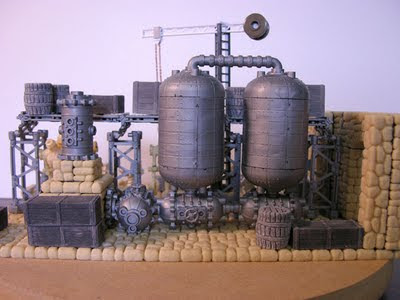 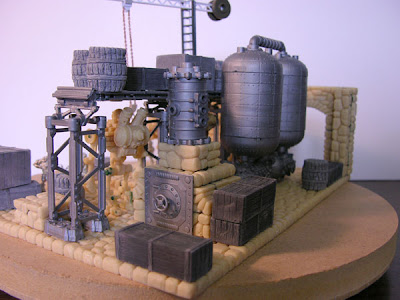 They say the Devil is in the detail and "they" are right! I wanted to sprinkle parts and tools all over the factory diorama just like the Sheperd Paine one had. I also had the idea that there should be a little break area with a table, coffee and donuts, and even a "Rivet-On" calendar. Since no third-party miniatures parts were allowed, I had to sculpt the wrenches, screwdrivers, shovel and other tools using green stuff. i had plenty of spare 'jack parts and painted up a few to populate the scene as well. The break area table was built using plastic stock and then decorated with sculpted details. These were all assembled individually, painted and then installed into the diorama as sub-assemblies. I painted the Trollkin pinup girl in Photoshop, and printed the calendar onto photo paper. I then detailed the days of the weeks with hand written markings and notes made by the factory shop manager. 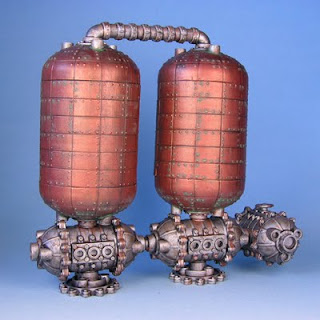 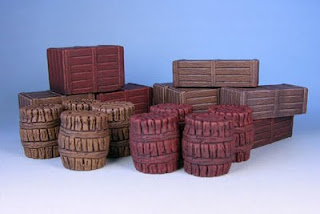 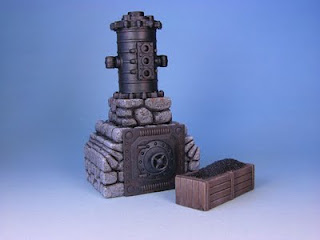 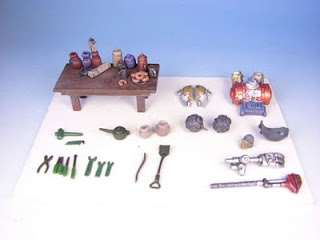 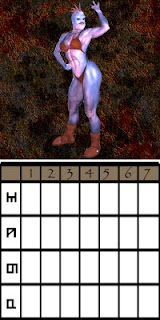 All of the scene needed to be weathered and used in appearance. I envisioned a smokestack belching, steam-powered factory covered in soot and oily residue, cranking out the valiant defeneders of the Kingdom of Cygnar. So, ample amounts of grays and umber colored washes were used along with burnt sienna colors to simulate rust. The figures of the various mechanics themselves were individually assembled, primered and painted, then inserted into their positions within the diorama. I really wanted to give the mechanics a well-worn appearance too. All of the characters were painted using Reaper Master Series Paint and a #1 Winsor & Newton Series 7 Watercolor brush. I used a tiny bit of GW Ultramarine Blue on the Warjack parts.

Eight months of hard work paid off. The factory got lots of buzz at the show and scored a Second Place trophy in the first annual Privateer Press Painting Competition. I got to chat with paint icons Mike and Ali McVey, gave them some castings of my sculpts, got autographs in my Hordes book and had my pic taken with the award. Overall I was very pleased with the results and had great fun seeing the concept evolve to the finished form. Be sure to check out issue #9 of Privateer Press' bi-monthly magazine No Quarter for more coverage of the Paint Competition and the Warjack Factory.