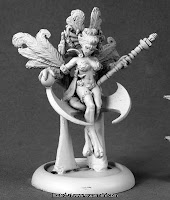 Many of you may know about my project in long development which is a Sci-Fi setting for gaming. It has been conceptualized as a tabletop skirmish game, a campaign setting for RPGs, a comicbook/movie/tv series, etc. It is also the setting of my 2005 short film escape that features Skip Westmoreland, in one of his many iterations, as an agent of the Galactic Recovery Agency.

When I brought the concepts to Reaper prior to their Chronoscope line I had a range of aliens as yet unnamed. Once I returned to sculpting in 2009 I approached Ron with the possibility of producing a few of my alien characters for their new line. He was amiable to the idea and provided the moniker of Andromidans to my alien species. 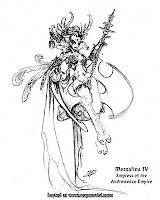 So at ReaperCon 2010 I asked Tim "Talin" Collier if he would be kind enough to design the Andromedan Empress for me. This design was later translated into the sculpt for the 2010 GenCon Painting Competition - Sculpted Greens category in which it won the fourth place ribbon.

Now it is available exclusively through Reaper Miniatures and offered in their online store and other fine retail establishments. I will try to add photos of her once she's painted. Currently Meg Maples is working on the studio model. 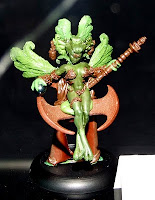 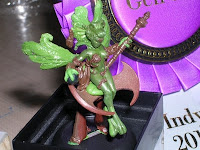 Posted by Patrick Keith at 4:48 AM

I saw this at GenCon. I'm really looking forward to getting to paint her! She's absolutely lovely

Looking forward to her paying a state visit to the UK ;-)
I'm curious as to the setting you've devised for her species and if you have any more planned, as I'd love to integrate them into the campaigns my gaming group plays.