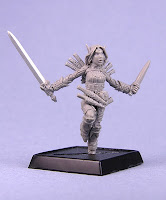 In anticipation of the release of the Pathfinder Roleplaying Game: Beginner Box I have completed a revised Merisiel sculpt of the Iconic Elf Rogue character. Her pose is reminiscent of the action from the box cover art and is a companion piece to the black dragon that will be coming out later this year.

Both of the pieces were shown during GenCon at the Reaper booth. I have since cut the dragon apart and am in the process of keying the pieces for moldmaking. Reaper will also be releasing a generic resin treasure hoard base that would make a suitable display to recreate a diorama of the fantastic box art by Wayne Reynolds.
Posted by Patrick Keith at 5:17 AM

Email ThisBlogThis!Share to TwitterShare to FacebookShare to Pinterest
Labels: Sculpts