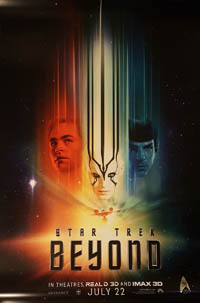 I’ve seen just about every Star Trek film on opening day since 1979 when I was 12. I can safely say that Star Trek: Beyond was probably the most satisfying Trek experience for me to date. It should have been called Star Trek: Beyond Adventure, because that’s what it’s all about. Although most Trek incarnations can get quite cerebral and heavy-handed as a morality play at times, this doesn’t let itself get bogged down in any of that. This latest installment of the franchise seems to be what TOS wanted to be from the beginning, immersed in it’s pulp sci-fi roots of pure space adventure.

Now, to be honest, I’ve always leaned a little more towards the Star Wars side of the fandom, but still grew up watching The Original Series frequently, and later through all iterations of the subsequent television series. I do not count myself as a dyed-in-the-wool “Trekker” in the purest sense, but I do know quite a bit of lore, etc.

The disdain for the reboot franchise notwithstanding, it’s pretty much what I want out of a Trek film. Simon Pegg certainly has a firm grasp on all of these characters and the script handles all of them in their truest forms. The subtle nod to TOS material is deft and off-handed, exactly the way it should be. My favorite thing about it was each and every member of the crew had a critical role to play in the story which reinforced that overall theme.

Justin Lin (several Fast & Furious flicks) certainly knows how to handle breakneck action,  which rarely lets up. The performances are spot on again and all of the new cast really makes these ingrained characters their own. The only thing I miss is Chris Pine pushing the Shatner-esque delivery a little more. It’s there in a few places, but I can understand it shouldn’t be over the top.

I can’t even begin to start on the visuals which are stunning beyond belief. The production design of the sets, epic vistas of space battles, and alien planets are just as detailed as the new magnificent layered and textured Starfleet mission uniforms. Everywhere you look is something new to discover. The visual style established in J.J. Abrams’  introductory installment is prevalent, but not distracting.

I thoroughly enjoyed it as an action flick and found it much more satisfying as an all new, original tale than the previous derivative installment. See it on the big screen the first chance you get.

Posted by Patrick Keith at 6:38 PM