The Empire Strikes Back - 40 Years

I would like to thank the one man who made Star Wars great on this 40th anniversary!
Gary Kurtz!

What? Who? Not George Lucas? Bullshit!

Although GL created a great margarita recipe by blending a lot of ingredients, Kurtz is the man who selected the quality of those ingredients, added his own seasoning, salted the rim of the glass, and added the lime wedge to finish it off.

Don't believe it? Watch the trilogy again and notice the striking change in tone between Episode V and Episode VI. I can distinctly recall sitting in the theater opening day of RofJ and seeing the weird cartoon characters in Jabba's palace, the belching frog thing sitting outside, and the torture scene with mechanical robots(!) and thinking to myself, "This is stupid! It's not Star Wars." And I couldn't figure out why it was so different until later . . . .


If that makes me a "toxic fan", fine. I say it's bullshit!
I still love the original two movies, not so much that goofy wrap-up with another Death Star and those damned Ewoks! I do admire Rogue One, and Solo for their contributions, plus the new TV things are cool like Clone Wars and Mandalorian. The rest of it I have zero interest for. But it all goes way further back for me.


So, it's May 21st 1980 in Texas. In the scorching heat, my best bud Michael, who I met in the 4th grade three years earlier, and myself are lined up to get tickets for the first showing on opening day of The Empire Strikes Back.


When we arrived, the line was already wrapped around the corner of the building. In those days the movie would only premiere on one or two screens in a city since each print of film could cost $250,000. We were seeing it on 70mm film for the very first time. So an hour and a half later we made our way to the box office, bought our tickets and then returned to the line to wait for the doors to open.

By this time we're cooked. Anticipation, fan chatter in line, and having to stand in the Texas heat, was all a part of the experience. One person standing in line in front of us was reading a paperback copy of the adaptation of the film. In those days, merchandise was released ahead of the movie like now, but spoilers had not yet become a thing.

So the line starts to move, everyone cheers, and we file into the theater. The rush of cool air-conditioning is a welcome relief! There are no assigned seats and no stadium tiers, it's every fan for themselves to get the best view of the screen.

With our seats secured and our eyes glued to the curtain, yes, in those days a curtain opened in front of the screen, we waited. The lights finally dimmed and a roar went up from the crowd. The 20th Century Fox and Lucasfilm logos appeared and the fanfare blared, then fell to silence as the familiar words appeared:

You could feel the heartbeat of everyone in the room.

Another roar from the audience went up as the the Star Wars title once again appeared and the familiar music transported us to that distant galaxy. The text was new, what had happened to our heroes since last we saw them? All that was washed away as the experience continued to unfold.

Every time I see this film it takes me right back to that place and time, on a hot Texas day hanging with my best bud, doing Star Wars stuff. If you had told me when I left the theater that day, I could watch that movie anytime, anywhere, at the click of a button:
I would have said, "Bullshit!" 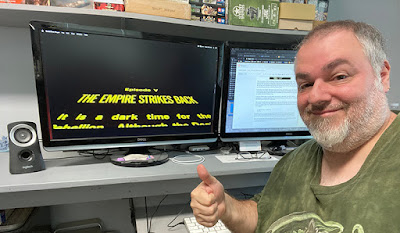 Posted by Patrick Keith at 7:29 AM