I freely admit that it took several seasons to warm up to the Clone Wars series on Cartoon Network. It wasn't because I actually watched the series. It was because I saw the trailer for the premier episode movie. Evidently they packaged what were the initial three episodes to the series and released them as a limited engagement presentation theatrically to kick off the series. It is also on Blu-ray now. I have a copy.

I was really put off by the promos and trailers for the series due to the featured storyline of rescuing a baby Hutt slug critter that proceeded to belch and fart his way through every other scene in the promo. I was about as put off by this as I was by JarJar and wrote it off as something not-Star Wars.

Some friends at the time were pitching a Star Wars RPG and we were planning to play in the Clone Wars era. Hence, we decided to watch a couple of episodes for inspiration. I will give anything three episodes to hook me. If I don't get it by then, it's a waste of time.

After a reluctant screening I was hooked. Not only were the episodes more reminiscent of the tone of the original film (ie. Ep IV) but it took it even one step further. The episodes were designed around a three-part story arc pattern that ended with mini-cliffhangers. This was the embodiment of the Saturday morning serials like Buck Rogers and Flash Gordon in an updated format. I was totally in and became a huge fan of the series touting it as better than the prequel films (ie, Ep I-III).

Lucasfilm sold Star Wars to Disney. Clone Wars was cancelled and the new series REBELS was announced. I watched every promo and followed the development closely assured that with the same team as the previous series, REBELS would be just as awesome.

So far the results have been hit and miss. One of the things I miss is the textures on the models. In Clone Wars all of the characters and scenery were mapped with a hand-painted look that showed textures as if the colors were applied with a brush. This is missing in REBELS, all of the characters and setting are slick and clean, which is very unlike a Star Wars aesthetic. The second thing I miss are the three-part stories with the cliffhangers. It's still a bit too early to tell if this will show up or not.

Around 1978, after the original film had been running for a while, I would catch a screening of it at a nearby cinemaplex for only a dollar! This one was big because it had FOUR screens to show movies! Afterwards I would walk a few doors down in the same strip center and peruse the local mom'n'pop bookstore. I would buy stacks of Amazing Stories and Analog and even (gasp!) Heavy Metal!

Imagine how excited I was to get a copy of The Art of Star Wars with all of the cool concept art and photos of the miniature models. I spent hours of my youth pouring over the images in the book until eventually the pages fell out. That book has been a great inspiration and the concept art that Ralph McQuarrie produced for the film expanded the possibilities of what could be seen, way beyond the capabilities of filmmaking at the time.

So over 35 years have passed and the nostalgia is running deep! With the scheduled release of Episode VII next year and this new animated series, I'm starting to get that old-timey feeling again. The show producers have clearly stated they have drawn on McQuarries designs to influence the look of the show and that make it even more exciting for me. 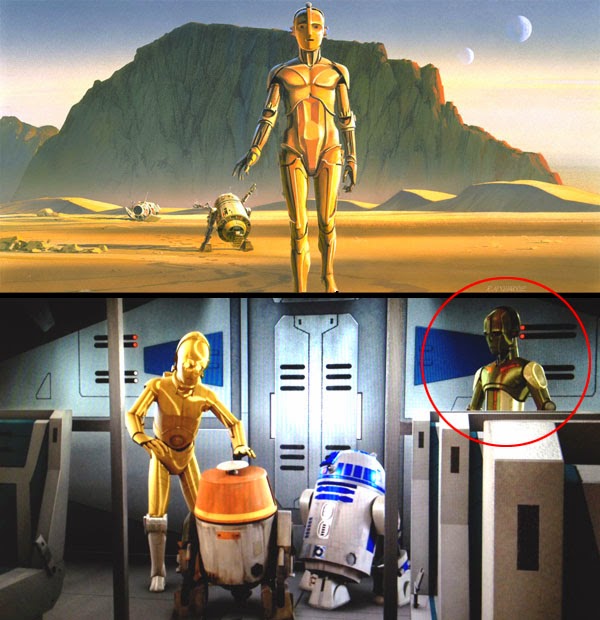 I really dig the assortment and variety of the characters they have chosen for the crew of the Ghost. It certainly is reminiscent of the early character designs from the first drafts of the screenplay for the first movie.


I do think the character names could be more original and I am not a fan of the kid, Ezra, who is an Aladdin stand-in, minus the monkey. He seems to be the "audience" character and is continually discovering things during the story that he would know about if he lived in that setting. So I call lame on that.

Also, the action is played for laughs, which worked in Firefly, but only because there was still an edge to the danger. The danger in this series seems really nerfed compared to Clone Wars but I'm hoping that once the Inquisitor character shows up, things will get more serious.

Posted by Patrick Keith at 8:14 AM